The Sanctuary and Termon of Cranfield

Home / The Sanctuary and Termon of Cranfield 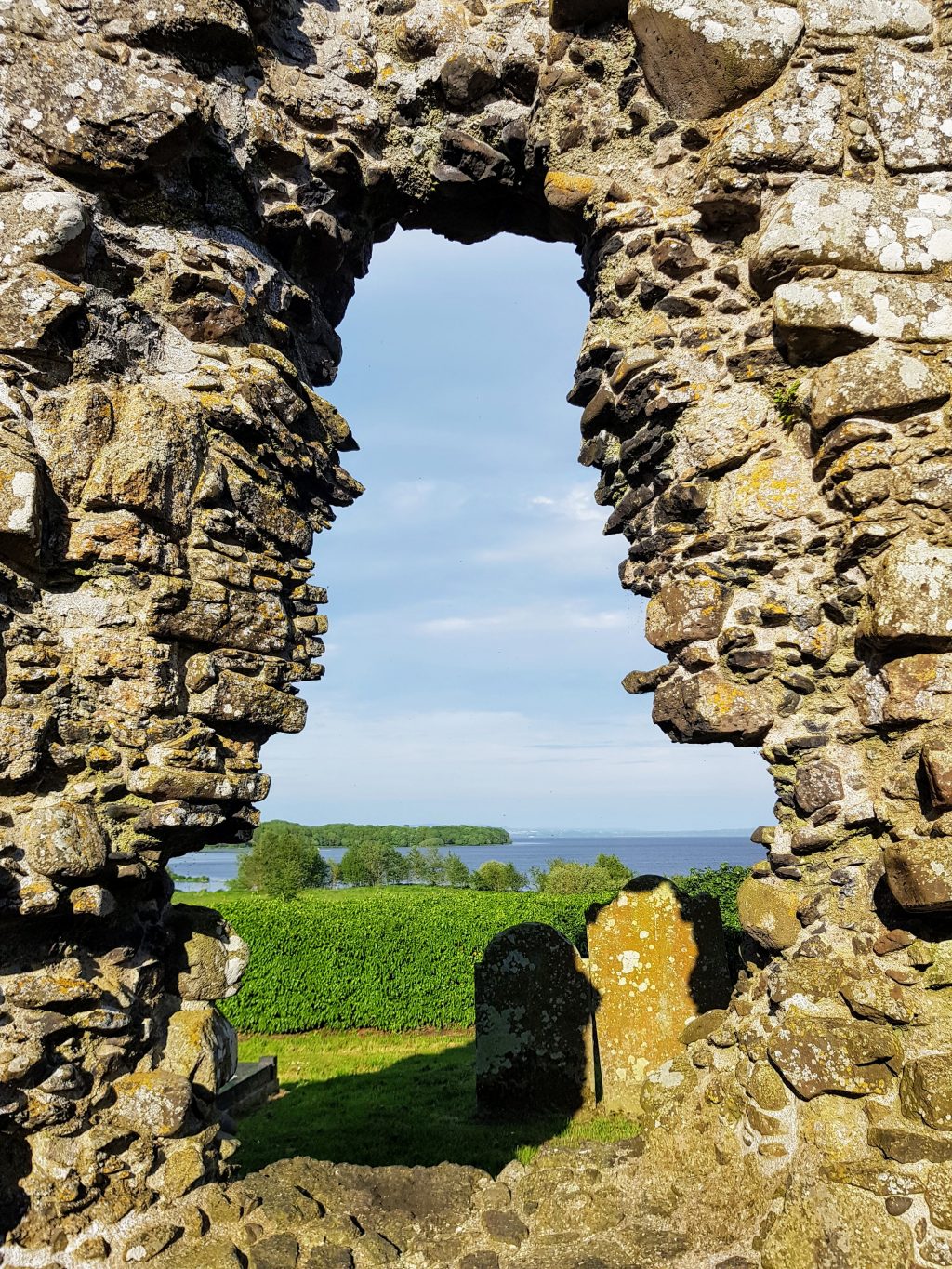 The Sanctuary and Termon of Cranfield

A few years ago, I had never heard of Cranfield ( Creamhchoill – Irish,  Wild Garlic Wood )  and yet I had passed only a few miles from it on the road to Belfast so often. Like a lot of loughshore places they were often near but yet so far from the outsiders knowledge. I have come to love the place with its medieval church ruins whose east window frames a magnificent view of Lough Neagh, to the curative  well of St Olcan surrounded by the rag trees that tell the story of many hopes and prayers to the quay at Cranfield Point that tells the story of so many fishing families and the search for eels and pollan in the past. It may not have the prestige of Ardboe but it has become for me a place of sanctuary and this, as I have realised is no accident.

The large townland of Cranfield was formerly made up of four subtownlands  and that amalgamation is now the present townland of some 858 acres. These are termonlands where boundaries and borders meet. Termon in Irish Tearmann originally referred to the lands of a church or monastery within which the right of sanctuary prevailed. It laterally came to refer to ‘church lands’ but if we dig deeper the origins of this go back into the earliest of times. Like many cultural practices, Christianity absorbed earlier beliefs such as termon.

The idea of borders and boundaries as “in-between” and special places are very obvious in places  connected especially with water, from wells to tributaries. They are where the gods were meant to dance at the confluence of waters. The mingling of the tributary and the main river was deemed to be a sacred place. The Celtic god Condatis, takes his name from the Gallic epithet “watersmeet”. He is literally the god of the two streams, the confluence, and was worshipped as such. All of this imagery of territories, other worldly kingdoms, liminal spaces describes a kind of mysticism which architecturally enunciates the “deep structures” of our lives, the line of the boundary between us and the “other world”. The  lough, rivers and wells are  the most picturesque analogy for that boundary but of course water being fluid makes the boundary a leaky one.

These boundary places are the areas where peace was made in ancient times before that advent of Christianity. Take the great site of Christian pilgrimage, Lough Derg, it was a place of sanctuary long before Christianity and is still today a place where boundaries meet. Its is the watershed between the Foyle and Erne river systems and where political, civil and religious administrations meet such as the counties of Derry, Tyrone and Donegal, the dioceses of Clogher, Raphoe and Derry. Historically the termonlands around Lough Derg have been a no-man’s- land between the powerful contending medieval factions of O’Neill, Maguire and O’Donnell and probably with their predecessors too. It was desirable that a buffer area should arise between prickly neighbours so that small border incidents need not develop into war. Monastic sites soon became to take on these buffer zones and the termon lands given to them would provide food and revenue for the foundation and also act as a place of sanctuary.

Sanctuariam – arium is soon adapted by the church as a “container in this case for the sancta / sancti – holy “ a sacred place or an altar. Human sanctuary becomes  Legal Sanctuary – Right of asylum / political asylum  and we even have a  sanctuary Movement in cities for refugees.

Back to Cranfield, it is also no accident that it has two termon crosses to mark these places, one in wood and the other in granite.  Termon is a wonderful thought and concept whatever ones beliefs.

It is also no accident that the great poet of this entire water scape of rivers, loughs and well has used this so much in his work. The great lines from Terminus capture the spirit of termon and of the place. “… I was the March drain and the march drain’s banks / Suffering the limit of each claim. / Two buckets were easier carried than one. I grew up in between…”

In his essay, Something to Write Home About , he explains that he grew up “in between” – raised near the River Moyola which served as a boundary between the Protestant/loyalist village of Castledawson and the Catholic/nationalist district of Bellaghy/Ballyscullion. In describing his childhood by the river, Heaney says “,I always loved venturing out from one stepping-stone to the next, right into the middle of the stream…Suddenly you were on your own .You were giddy and rooted to the spot at one and the same time… Nowadays when I think of that child rooted to the spot in mid stream,I see a little version of the god the Romans called Terminus, the god of boundaries. (Finders Keepers 51 ). He also makes the point that “the inheritance of a divided world is a disabling one, that it traps its inhabitants and corners them in determined positions, saps their will to act freely and creatively.”

Heaney reckons that , the Romans kept an image of Terminus in the Temple of Jupiter, the roof above the image was left open to the sky, as if, Heaney states, “a god of the boundaries and borders of the earth needed to have access to the boundless, the whole unlimited height and width and depth of the heavens themselves. As if to say that all boundaries are necessary evils and that the truly desirable condition is he feeling of being unbounded, of being king of infinite space.” (Finders Keepers 51 )

The space and place of Cranfield is somewhere that this tradition can be celebrated and kept alive and is more needed now than ever. It is ancient but it is new too.