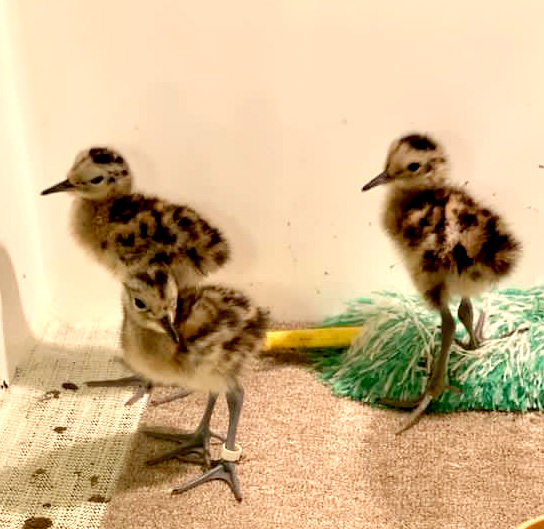 I am interested in finding out what is being done to help the Curlew, so I approached Siobhan Thompson the Natural Heritage Officer at the Lough Neagh Landscape Partnership.  I had heard about a dramatic event she was involved in last year when Curlew eggs had to be rescued from burning peatland.

In September 2016, in a 130 hectare site, the Lough Neagh Landscape Partnership was established with the help of the Heritage Lottery Fund to manage, conserve and enhance the wetlands.  Lough Neagh is the largest inland freshwater lake in the British Isles covering an area of 151 square miles; it is situated in the centre of Northern Ireland with five of the Province’s six counties touching its shores and is a haven for wildlife.

The aim of the project was the restoration of peatlands and wet grassland, but it wasn’t until March 2017, when Siobhan heard the call of several Curlews flying overhead, that she realised the area was an important breeding site for this endangered bird.  Since then the area of 3-4 nesting pairs has been monitored from a distance with birds being tagged with GPS devices.  Electric fences are erected allowing a 25m area around each nest to keep ground based predators away.  The team work closely with local farmers who are keen to be involved.

Siobhan explained “I wait like an anxious mum for the Curlews to return each Spring and hearing their call is so uplifting…”  In March the courtship displays begin, followed by the birds building a nest on the ground called a ‘scrape’.  By the end of April to the beginning of May the first clutch of eggs will have been laid.

Chicks hatch after 26 days, and at this point the female parent leaves and the male takes over.  Chicks leave the nest within hours of hatching, walk under the electric fence and literally run off as fast as their legs will carry them.  Siobhan remembers “I stood on a fence post watching in dismay as a tiny chick ran off across several fields disappearing into ditches and reappearing on the other side…”

In 2020 there were a number of fires on the peatland which continued on and off for three weeks.  It became obvious that the Curlew’s breeding area was going to be affected, so Siobhan and her team applied for a licence from the NIEA (Northern Ireland Environment Agency) to lift two clutches of eggs from nests and move them to safety, the first time this had been done in Ireland.

With the help of Dr Kendrew Colhoun and Kerry Mackie of KRC Ecological, the eggs were placed in an incubator and then moved to a secure location for hatching and hand-rearing. They were kept in a pen at RSPB’s Portmore Lough Reserve, and out of seven eggs, five birds were reared to adulthood and released in September 2020.

I asked Siobhan what hope there was for the Curlew in Northern Ireland going forward, and she explained that Northern Ireland is way behind the rest of the UK and Ireland in support.  England, Scotland and Ireland all have funding for habitat restoration and emergency response packages for the Curlew in place.  The plight of this iconic species has been recognised as one of the UK’s most urgent conservation issues and the NIEA desperately needs more financial help from the government.  Curlew numbers have dropped by 80% in Northern Ireland “if the situation isn’t prioritised this beautiful bird will be lost from our landscape in 5-10 years.”

For the original blog and much more, check out: Curlew Cottage Design