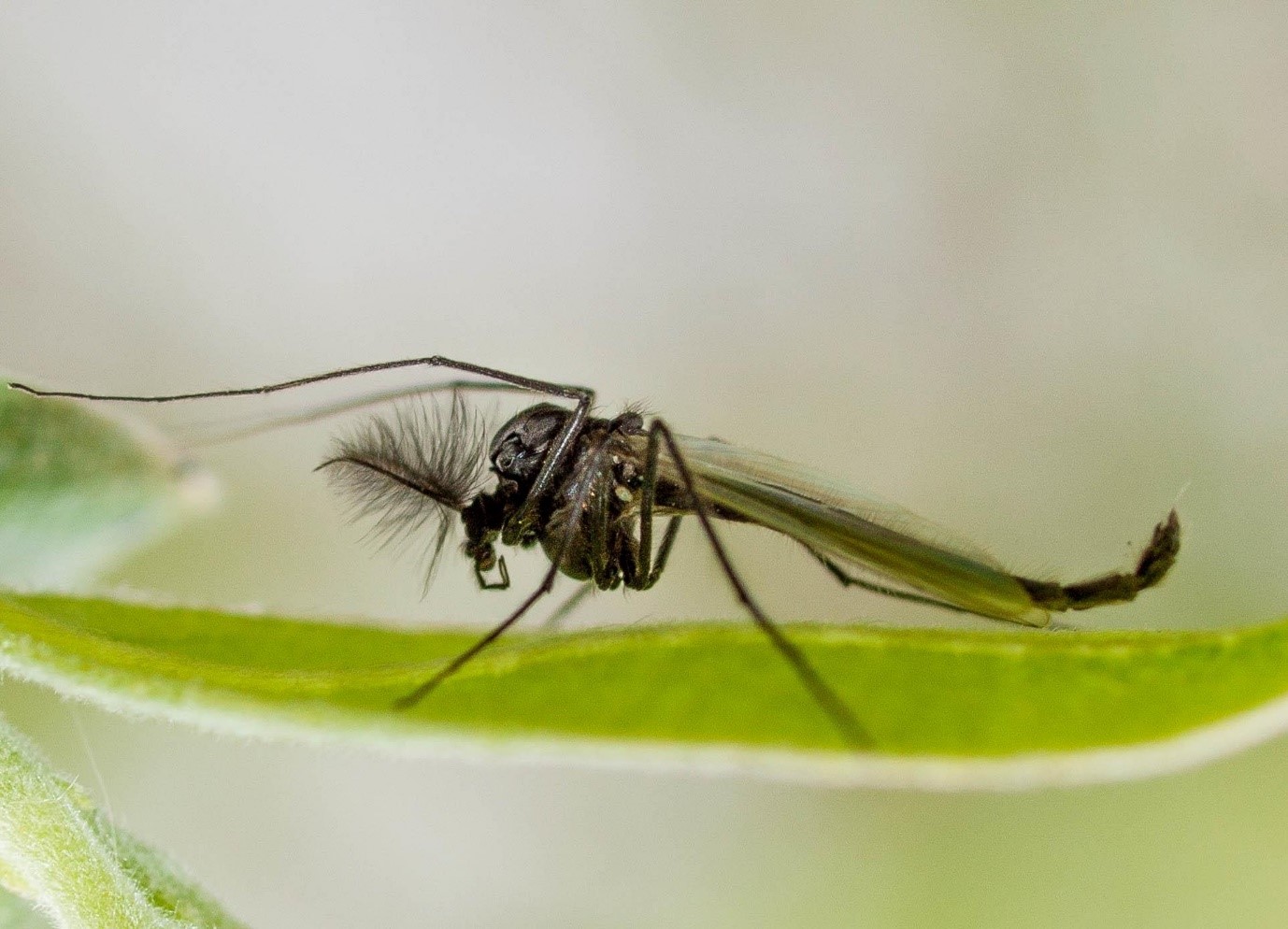 Over the weekend, I read three articles in different newspapers about the Lough Neagh Midge…

In one local paper, people were being “terrorised” by “plagues” of midge… In another regional paper, an indignant journalist compared them to coronavirus saying “a first tranche arrives taking lives and scaring us witless”…

I first encountered the harmless Lough Neagh midge in May 2016 – I arrived at work at 8am and noticed a few hovering around… Pockets of them sitting on the fences…  when I left the office at 11am to go visit one of my sites I came out the door to clouds of them… gliding in slow motion through the air, they didn’t make any noise, and though I feared I was about to be bit to death and drained dry of blood in the short dash to the car, I quickly realised this wasn’t the case… They flew all around me, bumping off my eyes, catching in my hair, making it into my mouth, but none of them bit me.

So started three weeks of large clouds of Lough Neagh midge – All my sites along and near the shoreline of the Lough had thick clouds of them, it was impossible to open the car window, without filling the inside of the car.. I would drive along the road and spot thick plumes of them swirling like smoke above hedges and treetops… In some ways when I watched them they reminded me of a starling murmuration, gracefully swooping and dancing around one another, I wondered what they were and what purpose they served.

I learnt that the Lough Neagh midge is a Chironomid midge, and that they are among the most important of the wild residents of Lough Neagh we will encounter. Lough Neagh is the largest fresh water lough in Ireland and the UK, it is a beautiful expanse of water that supports and provides homes for a vast array of invertebrate, fish, bird, and other wildlife.

The chironomid midge is right at the heart of that ecosystem, it provides a valuable resource for the wildlife in that food chain, blooming just in time for many of the species that live in and around the lough.  I love watching out my window as the Swallows, house martins and swifts swoop and race through the clouds of flies, catching them in their beaks and taking them back to the nests where hungry chicks squawked to be fed. The birds at Oxford Island have almost always been able to support 2-3 batches of young a year, and that’s down to the midge.

They have four stages to their life cycle – Egg, Larva, Pupa, and Imago (adult midge) and at each of these stages they are providing a valuable food resource. In the Lough, they are eaten by eels, fish, frogs and once they emerge from the Lough they help feed beautiful dragonflies, spiders, birds and other invertebrates… They live on the bed of the Lough for a year or more, eating dead plants and algae, acting as super recyclers of Lough waste products. If the midge wasn’t there, waste would accumulate and poison the waters, local wildlife would decline, fish and eels would not thrive and the fishing industry that supports many people and families around the Lough wouldn’t do as well.

I learned that as adult flies they don’t have any mouth pieces so cant bite or sting us, their sole purpose is to find a mate, and the clouds you see above the trees and hedges gracefully winding around in thick plumes are performing their courtship dances, the female then goes and lays her eggs in the water and then with no drama die and are absorbed back into the Lough…

When you know the bigger picture you can see just how important this little midge is for nature and people. What a valuable creature it is at all stages of its life cycle…

I started to feel a certain sympathy for the midge – alive for only a few days trying to find a mate – I would try to gently catch and release any that had inevitably made their way into my car as I dashed into it.. It didn’t seem fair to take them miles away from other midge especially as they had made it this far.. I quickly came to realise that wasn’t possible either…

So whilst I know they can be viewed as pests, and it’s a little uncomfortable having to walk through them, I know that after a few weeks they will be gone, and that really its worthwhile co existing beside them for that short time period. I think the much maligned Lough Neagh Midge isn’t so bad after all… 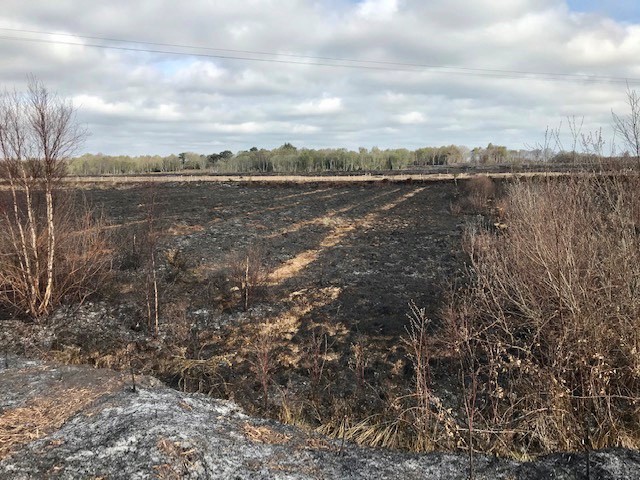 On the 2nd April, Agriculture, Environment and Rural Affairs Minister Edwin Poots called on farmers and land managers to halt all prescribed burning in the midst of the Covid-19 pandemic in a bid to reduce additional pressures on Northern Ireland’s emergency services.

What does this mean? In Northern Ireland prescribed burning is a method of land management that usually takes place, from Oct through to Mid-April – the intention of the burns is to “improve” habitat and the quality of grazing in areas of bogland.  There has been much debate in recent years about burning bogland and whether this is a successful tool, or if it further damages the habitat and species found on these unique landscapes.

What is a prescribed burn?

Prescribed burning is a planned management tool. It is applied to a given area of land under a controlled and regulated set of conditions. It requires careful planning & consultation with landowners around the area & others working on/in the area.  It looks at:

Prescribed burning is a complex matter and no matter how carefully thought out a plan is, there is always the potential for a burn to get out of control. This is why Local governments across the UK called for a nationwide stopping of burning as emergency services put their resource to helping fight a pandemic.

What isn’t a prescribed burn?  – A fire that is lit with:

Should we burn our boglands?

Our boglands used to be thought of as areas that needed to be improved, that should be drained, and that could provide fuel.  They were viewed as a practical working landscape. We know that historically in Ireland, boglands were areas that the poorer members of the community lived, there are many examples in local stories and nationally of the historical association between the Irish and their boglands.

They are a wealth of connect, culture and history for us. Telling us of the battles that played out in these spaces…When we dig up their peaty soils they reveal lost treasures and bog bodies preserved in time by the acidic nature of these boglands… They provide a thread of connect to our ancestors, people who lived and worked on these boglands, as we do today.

This common thread knows what it’s like to see dragonflies hover over large sphagnum pools, to watch the brown hares box and play in spring. To hear the call of the cuckoo or the bubbling crescendo of the Curlew.  We know that this seemingly empty landscape is a wealth of nature and tranquillity…

Communities that live in and around them are intimately connected to their fate.

What we know about our boglands today…

Our current understanding of peatlands and the role they play has increased significantly. It’s based on years of scientific research and analysis.

They act as carbon sinks when they are healthy, taking Carbon Dioxide out of our atmosphere and storing it in their wet peaty soils. Globally 30% of our Carbon is stored in these habitats – which when you consider that only 3% of the earth’s surface is covered in Bog is an impressive figure. Globally peatlands store at least twice as much Carbon as is held in the world’s forests. When we lower a bogs water table we start to release carbon into the atmosphere. The thousands of years of preserved carbon held in the decaying plant matter – Drained Irish bogs are estimated to release as much carbon dioxide into our atmosphere as the Irish transportation sector. Further exacerbating and accelerating the climate crisis.

Bogs help to filter dirt and improve the quality of our water – Lough Neagh is the largest freshwater lake in the UK and Ireland and these wetland habitats such as low lying bogs, Fen habitat and wet grasslands help provide the people of Northern Ireland with clean water, food, recreation, & jobs.

Peatland vegetation slows the flow of rainfall – Sphagnum moss found on peatlands is the key building block of our bogs, they are an amazing group of mosses – they can hold up to 20 times their own weight in water, and they hold water on and in the bog – hence the slowdown in the rate of water flow – helping to prevent flooding in local areas and communities.

They are a wealth of biodiversity – The moss supports the most endangered bird in the U.K and Ireland currently – Curlew, and there are other protected species such as cuckoo, large heath butterfly, snipe, brown hares, damselflies, dragonflies, throngs of insects… we have Sundew – one of the UKs only fascinating carnivorous plants.

Good bogs make for happier humans, more connected communities, stronger economies that benefit everyone, and not just one or two individuals making personal gain out of a resource that could be shared by us all.

Alive and thriving full of life and wonder is surely preferable to smouldering and dead? Creating a poorer, more difficult future for us all.

If you would like to keep up to date with our work, or to tell us why it is why the Moss is important to you or to volunteer with LNLP please contact me Siobhan Thompson on – siobhan.thompson@loughneaghpartnership.org