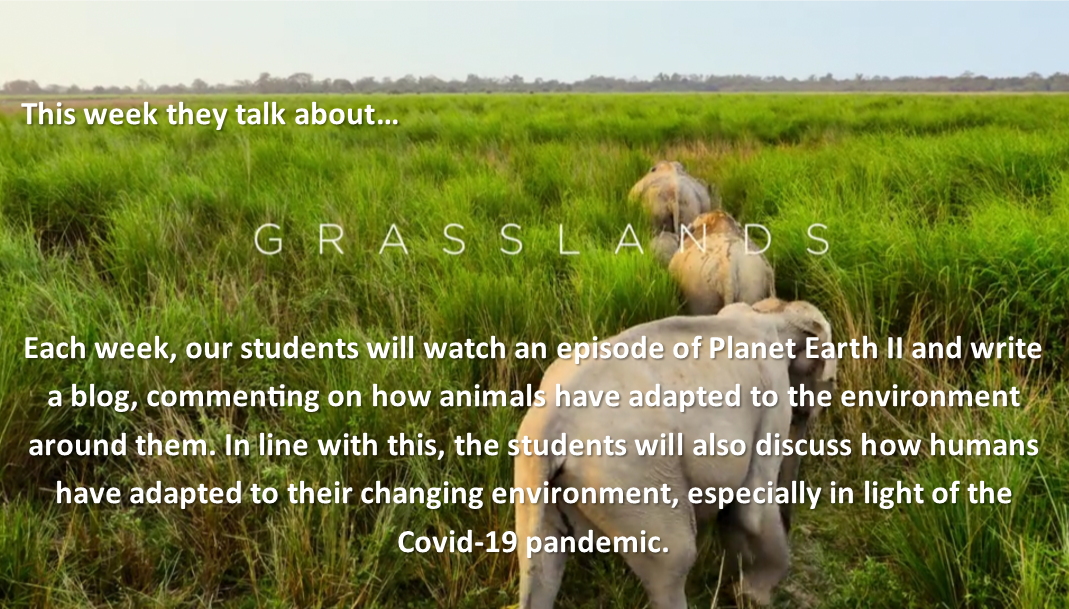 One of the most extraordinary types of plant in the world is grass. Grass covers about one-quarter of life on Earth and is virtually indestructible. Some species of grass can grow 2 metres in a day while others endure fire, ice and floods. Grass goes through a cycle of growing in abundance, then destruction, followed by recreation. As a result of the endurance grass has, it is able to support and host a wide variety of animal species all over the world.

Grass is very important to Saiga deer as they not only feed on grass, but also utilise the plant for hiding their new-born calves. This give the calves a chance to quickly learn how to stand up by themselves and be able to move with the rest of the herd. Saiga always give birth to twins so they can multiply at a faster rate when the grass is plentiful. Saiga will travel many miles to find new patches of grassland and can detect any new growths with their specialised nose. Most Human civilisations rely on grasslands for use of food. In todays age, we cultivate grasslands to grow crops which are sold to general public for consumption. The Prairies in the United States of America is exposed to some of the most intense agriculture in the world.

The Okavango is a grassland in Botswana that is home to many great species. Storms release large amounts of rain which floods the surrounding land. Most plant species would drown when submerged in the flood water, however, grass thrives and grows at a rapid rate above water level. Many herbivores take advantage of the rapidly growing grass although flooding can also hinder some predators. Lions find it difficult to hunt as the water prevents them from getting any traction for running while also making noise which alerts nearby prey. One advantage that the flooding does have for Lions is bringing in large gatherings of prey including Buffalo. These herbivores are very deadly with their heavy bodyweight, thick hide and sharp horns. In order for Lions to defeat such a beast, they must act cautiously and work together. Many years ago, Humans like Lions would have travelled and lived on floodplains for the same reason; flooded grasslands attracted large numbers of herbivore. This allowed humans to hunt the herbivores for protein and fat.

Some grass species can transform from first shoot into their flowering period in a matter of days. The flowers on top of these grass species provide food for a number of species including the Harvest Mouse. Harvest Mice will utilise the tall grass to help build a nest. The nest will be spherical, made out of tightly woven grass and built high above the ground in the grass to prevent attacks from predators on the ground. Harvest Mice will climb across long grass in search of food using a prehensile tail which allows for agile climbing. The most nutrient-rich food is at the top of the canopy, unfortunately, this exposes Mice to top predators such as Barn Owls. To evade predation, Harvest Mice often fall to the ground level and must make their way back to the nest. The Mice can read patterns of stems like a map and will be able to find home safely. Both Mica and Humans have what is called a Hippocampus, which is a brain structure that helps greatly improve memory and can create a mental map of areas. Humans have a more developed Hippocampus and so have produced many maps of sites with some even showing the entire planet. The use of maps have great importance in finding new habitats and in todays age, helps with positioning of cities for trade and transport.

In the African Savannah, grassland can be very rich in nutrients, however, this does not last as drought will cause the grass to die out. In some conditions the grass begins to burn due to the extreme heat. As the drought intensifies, the conditions become harsher for everyone. Animals with permanent territories such as Lions can tough it out and so stay put while other species travel across the Savannah chasing the rain and with it good grasslands. Jackson’s Widowing birds seek fresh grassland as it is not only vital for food but also for attracting a mate. The males use the grass and create a stage by evening out the surface by picking out grass shoots while leaving a centre piece of tall grass. In order to get the females attention, the males jump up and down in the tall grass. The winner is the male who can not only jump the highest but also the longest period of time. Females will then judge the males on how tidy the stage is build. In Humans, relationships can be made or broken depending on how tidy the partner is at home. There normally needs to be some compatibility with the lifestyle each has chosen. Most people prefer clean, tidy living spaces in which everything is organised.

Millions of grazers are supported by grasslands all over the world, with one species having by far the greatest impact. Grass-Cutter Ants made an ingenious discovery millions of years ago which is cutting down grass which is indigestible and feeding it to Fungus in their ant hills. This in turn allows Fungus to grow which the Ants then feed upon. As Ants have large numbers within their colonies they require the transport of huge quantities of grass. This practice is essentially pasture farming, which involves feeding and sustaining a living food source with another type of food. Humans have followed in this practice with the likes of feeding Cows grass in order to acquire good healthy beef.

Some grassland experience extreme cold conditions with much of the vegetation covered in at least three metres of snow. In the Prairie lands, Bison search for vegetation which would be buried under the snowy blanket. They use their brute strength and massive neck muscles to push through snow. This method is not always the most effective as it requires a lot of energy with little payoff. Foxes on the other hand use a bit more precision to pinpoint food as they seek mammals which move beneath the snow. Foxes have sensitive hearing to listen for movement and must be patient in order to be successful. This proves that it is often more beneficial to use intelligent behavioural tactics than rely on brute strength.

In conclusion, Grasslands have become a key plant group with a wide variety of species that have created many different ecological niches around the world. Grass along with its inhabitants has been able to survive by being resilient and able to overcome whatever the environment throws at it. Perhaps we could follow their example and make the best of our current situation.